Breakaway continues to be one of my all-time favorite episodes. Perhaps because it started the series, but more likely, because it was spectacular! They were able to convey an adventure, the scope of which has seldom been seen before or since. I still get chills when Nuclear Waste Disposal Area 2 blows up. The effect is only magnified by the brilliant score by Barry Gray. Which I used to listen to on a scratchy old album for decades, until Fanderson released the music on a double CD set.

There are a few things that I notice now that I did not notice when I first watched Breakaway. One being that Moonbase Alpha was not lit up until the second episode. Another, in the opening credits they show a canister of nuclear waste hitting a tower which explodes, this is never shown in the actual episode (at least not in any version that I have). 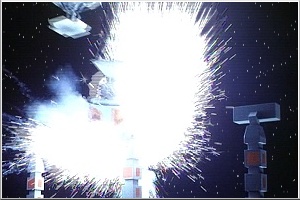 Another thing that I noticed that really impressed me was the attention to details, that really helped to reinforce the sense of reality. Things like the video cameras in the Nuclear Waste Area, so when the astronauts report the radiation counts, or Main Mission monitors the area, it all makes sense.

Also the use of commlocks to open doors and link to the computer is established. This works, not only to define their use for viewers, but to maintain a sense of reality within the world of Space: 1999.

Another thing that lends a great sense of reality is the fact that when people are contacted by video communication in this episode, they are not necessarily standing in front of the commpost or screen waiting to talk. This is something they apparently abandoned as the show went on for the sake of expediency.

In Breakaway, more than any other episode, the use of windows to establish a link between the interiors, and exterior sets (or miniatures) is at it's best. Nowhere is this more evident than the building at the Nuclear Waste Area, and the window to the Eagle hangar. This also gives a sense of scale to the base, and it's surrounding environment. In addition to the wide open sets (complete with ceilings), Main mission in particular, we have a sense of grandeur, and believability, not often found on a television series at that time.

One of the other things that really helped to sell the realism of Breakaway (and Space: 1999 in general) was the marvelous effects work. Some things that always bothered me about many science fiction shows was the fact that when anything blew up in space, it was always vaporized, that is to say, that you never saw any wreckage. While Space: 1999 was occasionally guilty of this, I recall being immensely impressed when the Space Dock blew up and you saw debris flying towards the screen. Also, you very rarely saw ships damaged on other shows. On Star Trek, when the Enterprise was "damaged" in battle, they merely hung the model at an angle, and we had to accept that. When Koenig's Eagle crashed over Nuclear Waste Area 1, you could actually see damage to the hull and superstructure! It is details like this that made this show stand out for me.

Add to this, a subtle acting style that stood apart from the melodrama prevalent in the seventies, and you have a show that stands the test of time. It's unfortunate that this lack of ham-handed acting was often perceived of as "wooden" or emotionless.  I think that if this show would have come out today, these same subtleties might have been better appreciated.