Matter of Life and Death is not exactly one of my favorite episodes, but it seems to suffer from having a downside to most of the positive aspects of the show.  We get to see the closeness of John and Helena's relationship, which is both good and bad. It's nice to see how much he cares for her. He obviously feels close enough to her to sit on her bed while visiting to see how's she's feeling after she "faints". John seems to be consciously restraining his jealousy. I got the distinct impression that he felt Lee Russell's re-appearance was inconvenient for their relationship, which was nicely played by Martin Landau. And I enjoyed seeing them holding hands after Terra Nova was restored. The "bad" part of this is that being the second episode, this seems a little rushed. I have heard that the episode was written in such a way that it might be aired out of order, as syndication at that time could not guarantee that the episodes would run in order. If this was, in fact, the case, it would also explain other lines of dialogue, like Parks saying "I think we made it this time", and Koenig stating that "many things have happened since we broke away from our solar system".

Another problem with this episode is their use of anti-matter. Victor seems to grasp the properties of anti-matter when he explains to John that if the process of reverse polarity were to reach completion in Lee Russell's skin samples, converting them to anti-matter, that it would mean annihilation for them. But many of the problems they faced in the episode seemed to have no connection to anti-matter. Why the electrical discharge on the Eagle at the beginning? Why would Paul's stun gun explode? Why would the seals on the Eagle (or Alpha for that fact) begin to degrade? It might have worked better if the Moon was destroyed by Lee's conversion to anti-matter, and the Eagle (it would have to be the same one used for the initial survey of the planet by Parks), with Paul and Sandra on board, was destroyed by skin, hair, blood, or something left behind as a result of Lee being on it earlier. The shockwave from the Moon exploding could still cause the landslide killing Koenig. This would alleviate the sense of randomness of the troubles they faced.

Another issue I always had with this episode is the fact that John seems determined to ignore the advise of the two people closest to him on the base, when Victor and Helena try to talk him out of going down to Terra Nova. I would have thought he would have taken much more stock in the opinions of not only his two closest friends, but his Chief Medical Officer, and his Scientific Advisor. 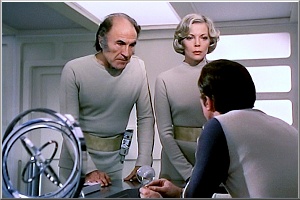 Then with the "reset" ending, there are no consequences for his actions. He basically doomed himself and everyone on Alpha to death with his stubbornness. Essentially the same thing happens in War Games, but it works better within the context of an illusion created by aliens.

On a more positive note, most of the effects in the episode are very nicely handled. The planet set is beautifully realized, and matches up nicely with the miniature effects. Although, I have to admit, I never found the sky quite convincing.

We see Alpha with lights for the first time in this episode. I think this really helps sell the illusion that it's real. 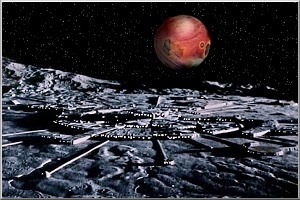 In my original review of this episode, I had mentioned that I enjoyed the fact that Paul Morrow died, if only temporarily, in this episode. I can only say that I feel differently now. I when I did the original page, I was till influenced by my original memories of the series. I remember never caring for Paul when I watched the show growing up. For some reason it seemed he was always the main character who would turn on Koenig. Pointing a stun gun at him in both Guardian of Piri, and Another Time, Another Place, and slugging it out in The Last Sunset. I guess I held that against him! But seeing the series through many times since then, I can see where Paul was more often at Koenig's side, than not. 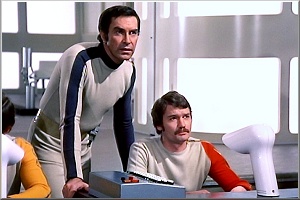 As an interesting side note, I found a picture of a deleted scene, or alternate take,
of Helena and John over Lee Russell in Medical Centre where she is wearing a white lab coat. 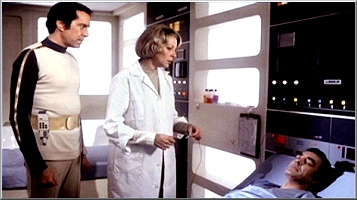