Black Sun is one of the most popular episodes with fans (and cast members), and I am no exception. This episode boasts some of the best character driven moments of the series. There are suggestions of interpersonal relationships all over the place. I have always wondered what relationship, if any Mike Ryan has with Sandra. There is an implied closeness between them which is reaffirmed when he dies, and Sandra faints. Then of course the budding relationship between Paul and Sandra, which appears to be more strongly driven by Paul, and almost deflected by Sandra (Sandra: "It was thoughtful of you to come, Paul. You didn't have to." Paul: "I wanted to."). Which, given the apparent relationship between her and Mike Ryan, makes sense. Then, things get interesting with the addition of Tanya to the mix. 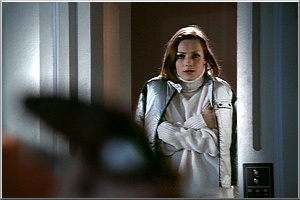 She shows up at the door to Paul's quarters, and joins him on his bed. To be honest, I never thought anything of this when I first saw it, but with age, and feedback from other fans, there does seem to be a hint at more going on than meets the eye.

Then of course we get to see more of the ongoing relationship between John and Helena. There are some great scenes, like her scolding him and Victor for their foolhardiness on the lunar surface; and her wanting to stay on Alpha, while he insists she go on the survival ship.

There is also a nice development in the relationship between Helena and Victor, as in the scene where she rubs his chest in Medical Centre after he is electrocuted, and when he sees her off with a kiss on the cheek before the Survival ship takes off.

There is one scene that does not work quite so well for me. When Alan confronts Koenig about the survival ship.
His speech ends up sounding more cowardly, than heroic or inspirational. 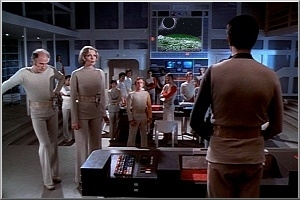 If I were to guess at the reason, I think maybe they should have left out the line when he says "I care about how I die". And, perhaps, he could have approached Koenig asking why he, as head of Reconnaissance, wasn't notified about the ship, making it a little more professional, and less personal. Or just maybe they wanted him to have a weak moment where he was confronted by his own mortality and showed a little weakness. But personally, I prefer to think of it as a small slip in an overall excellent script, than a character flaw.

On the opposite side of the spectrum, I have always enjoyed when Victor waxes philosophic, and in this episode, he is free to do just that. His musings in this episode, are among my favorite lines he delivers in the series with the possible exception of his "goodbye Alpha" speech in Wargames. The writers outdid themselves on this one!

I also found it interesting that when asked who she was, the voice within the black sun responds "a friend". This is the same answer given by Arra in Collision Course. With the time and space bending properties of the black sun, perhaps this is Arra in another incarnation? Perhaps after her mutation into a higher form?

There are a few small errors in this episode. The most glaring would have to be that the force-field, as shown, doesn't even cover the entire base, let alone the entire Moon. So why isn't the rest of the Moon crushed as they pass through the black sun?

And how, if it was reprogrammed to reverse the force of the black sun, is it still maintaining the gravity on the base? Another small flaw, is that the survival ship is shown facing to the right, with the boarding tube in the foreground while it is being loaded (which matches all the other angles we

see it from), until it launches, where it's facing left with the boarding tube in the foreground.

One last thought about the title of the episode itself. Where any other film that I can recall would have referred to the phenomenon in this episode as a black hole, they use the term black sun. I'm not sure if this is because when it was made, the term "black hole" had not come fully into vogue yet. They maintain the use of this term in Dragon's Domain and Seed of Destruction.