Collision Course is one of my all time favorite episodes. It is highly representative of the existential style of season one of Space: 1999. Something I always felt set the series apart from many of its contemporaries. In this particular episode, they pit logic (or science) against faith. Another interesting thing about Space: 1999, is that even when dealing with faith, they never use conventional religion as an easy representation. It is always something less specific, thus more universal. In this case, we deal with Koenig's faith in the mysterious Arra (played by the magnificent Margaret Leighton in one of her last performances). 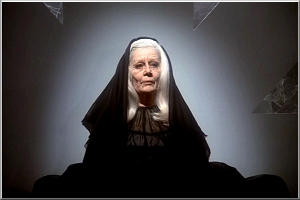 Of course, as mesmerizing as she was, it's not hard to see why Koenig would have believed her.  But it was smart for him to realize that as convincing as she was in person, he would have a hard time convincing the rest of the Alphans in the bright, sterile light of Moonbase Alpha.

This episode also features one of my favorite scenes with Martin Landau. When he tears up while trying to give Alan a chance to survive the explosion at the beginning of the episode, and he chokes up wishing him good luck. It just gets to me every time! 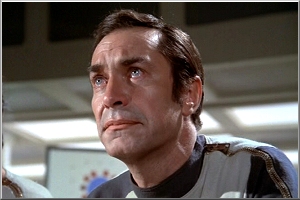 One of my other favorite scenes is at the end of the episode when everyone steps back from the view screen as Astheria gets closer and closer, isolating Koenig. It's almost as though they are trying to get away from the danger in front of them, as though those few steps would make much difference if they collided with another planet! Now that I think of it... shouldn't Alan have been standing there with him? He was helping John to fulfill Arra's plan. Of course you can't help but feel bad for John when he begins to wonder if he made the right choice. Who hasn't been in a similar situation? You know... wondering if you made the right choice, not the "planets on a collision course" situation.

I always kind of felt bad for Alan in the scene where he sees Arra in Medical Centre. If Arra decided to appear to him then, why would she do it right where Helena was standing? When she disappeared, she made Alan look like an idiot! 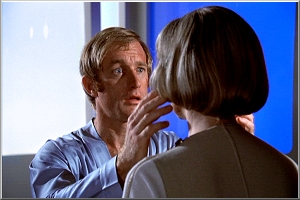 Another scene which always struck me a little odd, is the one where Alan and John meet in the hall after Alan leaves Medical Centre. While I really don't believe it is the actual intent of the scene, but the way that scene is filmed (with both of them speaking their lines off screen, while the other is on camera) always made me think that they were communicating telepathically.

Among all the things that make this one of my favorite episodes there are still a few minor flaws that I feel compelled to mention. One being the issue with the buttons on the commlocks. John's in particular, but even Helena and Victor have issues with theirs.

I suspect Barbara Bain and Barry Morse shared the defective commlock in question because in each scene the same button is missing, and when Victor has it, Helena doesn't seem to be wearing hers.

Another scene that gives me an unintentional chuckle is when Alan enters Main Mission through the Commander's Office and throws the trolley to distract everyone. Operative Kate looks too early, than looks away, and doesn't seem to know how to react when the trolley finally hits the floor.

The woman to the far left also doesn't quite seem know how to react. Luckily I usually focus on the main characters rather than the extras, but I'm not sure if I will be able to on this scene from now on. And thanks to me, you might not either!

I find it interesting that Paul suggests recreating the events that blasted the Moon out of Earth orbit, and the idea is discarded for the shockwave idea. While I'm not a physicist, Paul's plan does seem the more likely of the two to work. Besides, as far as the Alphans are concerned, it already worked once in Breakaway. Odder still, they return to the same idea in Séance Spectre and successfully use it to alter the Moons course.

These are minor flaws in an otherwise brilliant episode which embodies most of what I love about this series. I love that we are left with the same questions that the Alphans are. Did Arra save them, or was she just aware of a greater plan, and knew that the M.U.F. would intervene at the right moment? I heard an idea that I liked very much, and can't recall the source. But someone suggested that it would be cool if Arra, the Black Sun Entity, and the M.U.F. were one and the same, citing that both Arra and the B.S.E. responded to the question "Who are you?" with the same answer: "A Friend." And both, at least, appeared to be instrumental in the survival of the Alphans in what should have been fatal circumstances.