While Ring Around the Moon is generally regarded as one of the lesser first season episodes, I actually like it quite a bit. This is not to say that it is without flaws. But despite them, there is a lot that I find appealing about it. One of the first things that springs to mind, is the design of the aliens. I really like that they went with a non-humanoid design. And along with this, I liked that they illustrated that humans tend to project familiar (human) traits to something that they haven't even seen. This sort of anthropomorphizing really works in the context of humans being trust into a universe that they were not yet ready for. So it makes sense that it took them about two thirds of the episode to consider that the Tritons, may be physically different, making them limited in someway.

The acting is strong all around, with plenty of nice character moments building the personalities and relationships between the crew. We get to see Alan as an independent thinker who is willing to speak his mind to the Commander, but will follow orders, although not blindly. Koenig obviously respects this about him, as he cares enough to visit him in Medical Centre to check on his wellbeing after the crash landing. 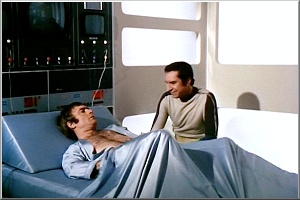 We see at Paul Morrow's competence, and the respect in the eyes of his fellow Alphans, when he safely lands Koenig and Carter's Eagle after they pass out. It's also nice to see the satisfaction on his face after they touch down.

John and Helena have a nice scene when he asks her to go along with the plan to jam the computer. I'm sure he could have ordered her to go through with it, but instead he took her feelings into consideration. And although Helena appears concerned, she bravely goes along with it.

Building on the relationship between Victor and Helena seen in Black Sun, there is a great scene where she is holding his hand for support while she awaits her final activation. 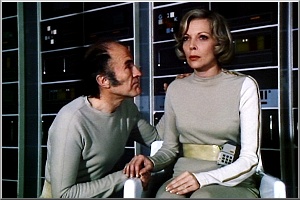 As much I love the music of Barry Gray, I really enjoyed the different music in Ring Around the Moon, by Vic Elms and Alan Willis. Although the music seems far more dated today, I still love the "waka-chicka waka-chicka" music played during the walk on the lunar surface, as the Alphans go out to Alan's crashed Eagle, as well as the more somber variation. Click below for short samples of each.
SAMPLE 1    SAMPLE 2

Now on to the down side of the episode... One of the major flaws of Ring Around the Moon is it's pacing. It tends to feel padded, as though the script were not long enough for a full hour. You really start to feel this during some of the scenes of flights to the sphere, especially by the third trip.

They tried some animated special effects, which was a rarity for Space: 1999. Unfortunately they came off looking extremely two dimensional.

For fun, I tried updating them a little to give them a more dynamic, three dimensional look.

There are plot points that strain credibility too. Like, how was Victor able to locate Triton, a planet two million light years away from Earth simply by hearing it's name? I guess the Pyramid Texts of the Old Kingdom were supposed to have described it's location, which he matched up on his star charts. Ok, I can let that one go. But how do the modifications to Helena, which allow here to hear and see, and transmit information like a computer, allow her to teleport through doors? And even simpler still, if she is transmitting data that she sees and hears, why isn't the data that she's calling up on Computer being displayed on a monitor? 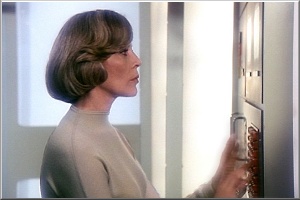 As shown in the episode, it would make more sense for Computer to be transmitting. Otherwise, the Tritonians would only be watching her typing really, really fast.

There is one line of dialogue that always really bothered me. When Helena transmits the data confirming the destruction of Triton, Koenig identifies some images saying "This is Triton's galaxy. This is Triton's star system. This is Triton's universe. This is Triton's sun." "This is Triton's universe"? Isn't there only one... per dimension anyway? I can understand flubs with really difficult scientific concepts, but this seems far too elementary to be problematic. This, as opposed to something like Helena asking if Dr. Mathias checked her middle ear when she suffers from dizziness. If a friend hadn't pointed this out (thanks Barbara!), I would never have realized that dizziness would be caused by damage to the inner ear. In my mind, a somewhat more forgivable mistake, although it would have been ideal if they had a medical advisor to help with these types of issues throughout the series considering the prominent role of Dr. Russell. Another simple medical slip-up (pointed out by Ted Buck) is when Doctor Mathias examines Helena after her return to Alpha. He states that her "blood pressure's normal, 80 over 120" when a normal reading should be 120 over 80. Yes, I think a medical advisor is sounding like a good idea about now!

Then there are minor gaffes like Ted Clifford putting his instruments down where there is supposed to be a pane of glass. 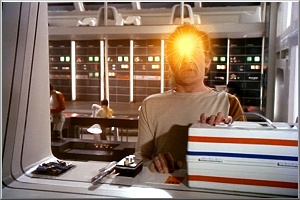 And Helena's Thermographic plate is held backwards by Dr. Mathias. We shouldn't be able to read her name.
I chose to correct this oversight for the image on this page. 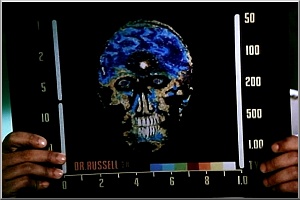 Then there is the matter of the commlock that Koenig places on his desk while talking to Alan. I don't know why they chose to change Koenig's picture for that shot, as it doesn't serve the story in any way. It just stands out as a continuity error. 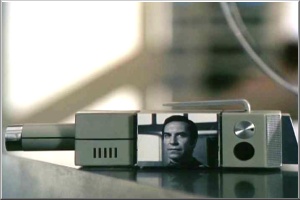