War Games is probably one of the best remembered episodes of the series. Not only does it have great battle scenes... plenty of destruction (and effects shots), the like of which was just not seen on episodic television before. Just think about it. When did you ever see the Enterprise actually damaged? The closest they ever got to showing damage, was filming the model hanging crooked in space! Contrast that, to shots like these...

Add to that, one of the finest dramatic moments of the series, the monologue that Victor records (for anyone who finds the empty shell of Alpha) as Operation Exodus nears completion, is both moving and thought provoking, and never fails to choke me up.

I also love the alien city in this episode. It is just really cool! What can I say?

Now that I have glowed over the highpoints of this episode, I think it is time to pick a few nits... there is a a small conitnuity error in this episode when the fleet of Eagles leaves Alpha for the planet, the base is not damaged at all. This is probably because this is the same footage used in Guardian of Piri for Operation Exodus. Which brings me to the subject of a new section that will appear occasionally in addition to "Random Thoughts", it will be called...

In this section we will take a look at, or rather, take a second look at, some of things that appear more than once in the series. This will include reused models, stock footage, and actors who reappear in different roles etc. First off, the nameless alien planet looks eerily like Piri, especially as we see it over the Main Mission tower. 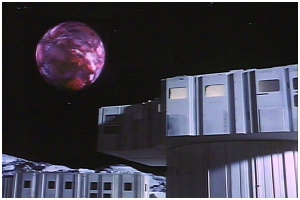 Speaking of look-alikes, the bomber in this episode can be spotted in the episode "Alpha Child". Perhaps this is because the aliens used the Alphans' memories to create the illusion of ships attacking the base.... Naaah! 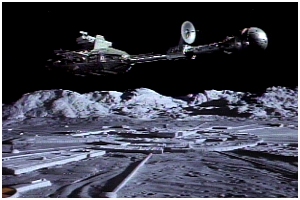 As always, any comments, feedback, or suggestions for future appearances of "Deja View" are welcome. You can contact me by using the commlock in the Communication Centre.