While, not exactly one of my favorite episodes, Full Circle does have a lot of good elements. This is the first episode that is not filmed entirely on sound stages. We get to see the Alphans outside in a real forest. This lends a sense of reality that has not been seen before on the show. To help maintain this level of reality, the costumes for the "stone age" characters were not all created by the costume department. The actors were asked to create their own costumes from animal skins, so they would not look like the leather bikinis seen in movies like One Million Years BC.

There is also a terrific effects shot of the moonbuggy driving away from the Eagle. 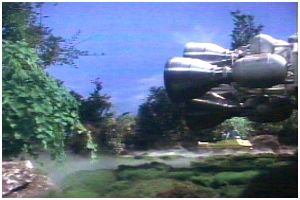 If this is all done with miniatures, they did a great job of matching the positions of the characters in the moonbuggy to the real footage. I would have liked to have seen how they got the Moonbuggy out of the Eagle though.

This is one episode (along with Black Sun) where Paul shines. He is really likable for a change. We get to see his tremendous affection for Sandra again. Little touches, like his "Love to Sandra." line, really help me to like him better.

It is great to see Kano on a reconnaisance mission. Until this point, I had no idea he could fly an Eagle! I bet he was glad to get out of Alpha. The only other time I can think of him getting off-base is in Guardian of Piri, and he was probably too "zoned out" to enjoy it.

On a similar vein, Sandra gets to ride in the cockpit of an Eagle for the first time. She is usually relegated to the passenger module. it is great to see her "toughen up" a little in this episode. After a wimpy start of being frightened when she wakes up in the Eagle alone, and doing the housework (picking up the sleeping bags and cooking for the other crewmembers), she puts up a decent fight when she is kidnapped, and then clobbers the cave-Koenig with a rock!

One of the scenes that bothered me in this episode, is where Alan fights the caveman in the pit. Why is he slugging it out when he has a stun gun on his hip? 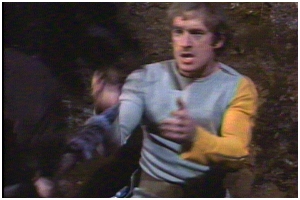 It would only have taken a few seconds to show him losing it when he fell into the pit to have this scene make more sense. Another scene that bothers me is when the caveman picks up Alan's commlock and Sandra is talking to him. Since the commlocks have a video screen, why doesn't she know it is not Alan? We won't even discuss what happens to the Alphans' clothes when they pass in and out of the mist... I guess some level of "willing suspension of disbelief" is required. As always, any comments, or replies to statements made here are welcome. Just use the commlock in the Communication Centre to send me an e-mail.