Missing Link is an interesting episode on many levels. I find it intriguing that Man is the missing link in the evolution of the Zennites. This idea works with the concept of the Arkadians seeding the galaxy with new life, if we assume that more than one ship left Arkadia, or the one ship left Earth, and continued on to Zenno at some point. But to justify the difference of "two million years of evolution" between Man and the Zennites, someone would have had to pass through a time warp on the way to either Earth or Zenno.

On a more "down to Earth" level, I love the fact that the Zennites are portrayed as relatively normal people. Vana feels sympathy for Koenig as he is clearly distraught with his situation, and eventually falls in love with him. Even better, is Raan's all too human reaction to this. Of course no man is good enough for one's daughter, but someone two million years behind on the evolutionary ladder? This will not do! Peter Cushing played this brilliantly. The dismayed look on his face was enough to let us know he would not stand for this. 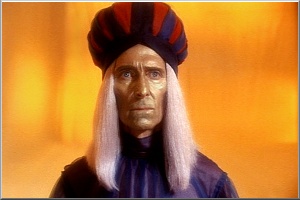 He immediately begins scheming to get rid of her would-be suitor. When he brings Sandra to convince Koenig to return to Alpha, Vana's reaction is perfect. She knows what he is trying to do, and has reason to be distressed. Joanna Dunham does an excellent job as the ingénue, playing it very honestly, not sappy or cloying.

This episode also provides the rest of the cast plenty of chances to shine, and all take good advantage of it. Martin Landau does and excellent job throughout, with highlights like the scene where he is is covered in cobwebs during the dream sequence. He does have one scene that seemed a little over the top though. When he laughs sarcastically before saying "My being considered the caveman of the future, is your idea of a situation?", it just doesn't come across naturally to me. I found it interesting that he came across as more of a "matinee idol" in his scenes with Joanna Dunham than I had ever noticed in any other role of his that I have seen. 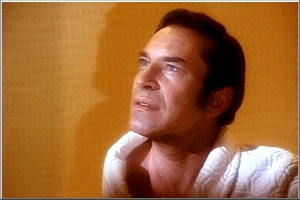 Barbara Bain does a wonderful job as well. When she almost loses John after trying to revive him with the shock treatment, and when she prepares to turn off his life support before Alan bursts into the Diagnostic Unit, are two scenes that immediately spring to mind. I also loved her trying to justify John's failure to recover by stating that "it may simply be John's time to die".

Nick Tate also does an excellent job in this episode. Alan's refusal to give up hope on the Commander at any cost, is a wonderful display of his loyalty. Also the fight scene with the guards was very well choreographed, one of my favorites of the series. Poor Bob Mathias takes the brunt of it. I always feel bad for the Security Guards on Alpha. Everyone always seems to get the drop on them. On the up side, at least they don't die as regularly as the "red shirts" on Star Trek!

I really liked the way this episode was filmed. There were a lot of interesting camera shots, without them being either distracting or disorienting. One such shot was in the "fake" Medical Centre. Koenig thinks he sees Raan's reflection in a mirror on a table. When he passes in front of the mirror, the camera stays on it until Koenig comes back into view, and his reflection turns to face the camera. Very nicely done.

Speaking of the "fake" Medical Centre... this is where one error in the episode takes place. As Koenig looks at the screens displaying the medical conditions of the Eagle crew, his name is misspelled in the insert shot, but correctly in the wide angle.

When asked whether or not this was intentionally done to tip off, either Koenig or the audience, Keith Wilson replied that it was not. Another goof, is when the command module is separated from the rest of the Eagle to carry Koenig back to the base. When they show the interior, the door to the companion way is still open. Thanks to Don Monk for reminding me of this one. I suspect this was a mistake born of necessity. I don't think the cockpit set was designed with a stretcher in mind. 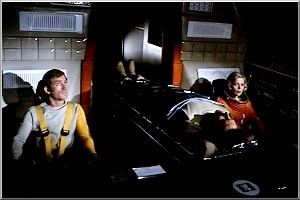 Another potential goof is when David Kano states that the Eagle crash landed approximately 100 miles from the base. Are we to assume that Koenig walked all that way back to the base? No wonder Raan said Koenig must be tired after his long walk! Although this could be explained by the idea that in Raan's scenario of the events, the Eagle crashed closer to the base.

On the subject of Raan's experiments. I was always impressed at how dark, psychologically, the producers of the show let things get. Koenig's ghoulish manifestations of his fear were pretty disturbing, but one in particular tied in very nicely with the dialogue about experimenting with recording animals brain patterns. 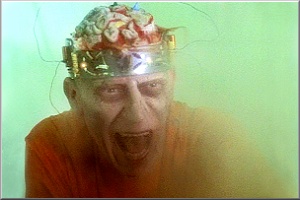 There are some excellent effects, including the very cool matte painting of Zenno. The addition of the lighting effects traveling down the tube in the center of the screen really help bring it to life. And I always thought the buildings were really cool too! 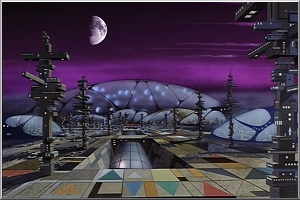 And there were a few that didn't work quite as well. The obvious use of cutouts detracted slightly from the scene were the winch Eagle comes to remove the command module of the wrecked Eagle.

They still did a pretty remarkable job considering they only had one full sized Eagle module to film at this point.

Over all, I really enjoy this episode for the thought provoking ideas it tackles, the possible alternate evolution of man, human/animal rights, and the mind versus the heart.